Posted on April 1, 2013 by dgcoker.wordpress.com

While returning from a day of golfing I drove into the yard to witness my three sons playing a game of T-Ball. It had been a long day for me and I was in the middle of completing a residency for the doctorate and T-ball was in the distant reaches of my thoughts. After all, I was working hard and I deserved a day away from the pressures of life. However, that scene with the boys in the yard weighed heavy on my heart. During the week I discussed my feelings with one of my dearest friends and he gave me the best advice anyone could offer a parent. He said “you know those golf clubs you have? Stick them in your closet. They will still be good when the last son goes to college.” He was absolutely right. As long as your children are living in your house they should be a top priority. Children need cheerleaders. My dad took that same approach. He made me feel like whatever I was doing it was the most important thing happening.

When parents become cheerleaders, children begin to get excited too—whether it’s schoolwork, a dance recital or a ballgame. Children take their cues from their family. I tried hard not to push our boys in any particular direction. My philosophy was for them to find their passion whether hitting a ball or playing a musical instrument. I have etched indelible on my mind attending a piano recital for my oldest son who played very last at the concert. His part lasted approximately two minutes; I waited an hour and a half for those two minutes. I learned quickly how to be a professional fan. I’ll cheer for anything, and on that day my son became Beethoven.

I had to be especially careful when it came to sports. There’s a fine line between encouraging your children and setting expectations based solely on winning or personal achievement. Unfortunately many parents put pressure on their children by turning sports into work or criticizing their performances. Sports should be fun, as they were in my generation, and often that means parents need to stick to the cheering section so their children can just play.

I believe God instills in all of us the knowledge of what’s right and wrong. So I think children already have the answers they need, but as a parent I need to talk with them and help them reach their own conclusions. Many times I need to join with them to make the situation more comfortable.

After the scene on that memorable day I became an avid T-ball player. I also found myself plopping down on the couch starting a conversation. Sometimes when I would tuck them in at night I would lay down on the bed beside them and we would just talk.  It’s amazing what comes out of their mouths in those moments.  Despite the intensity of work, I made it a habit to be home as much as possible for their games, recitals and school functions.  My sons brought an inner joy and that for me is the essence of what life should be.  That’s how I knew those golf clubs in the closet —-and everything else—could wait.  I was much happier as a cheerleader.

(a side note:  It’s interesting all three boys became outstanding baseball players, two of which received college scholarships playing baseball.  Today they are outstanding golfers and regularly defeat their dad on the golf course.) 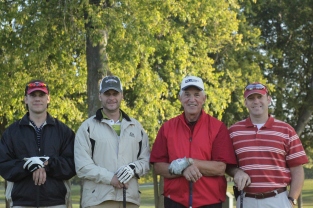 “Reflections” is written while going down the road of life looking in the rear view mirror. Each article is written with the goal of sharing experiences that may assist other persons in similar circumstances.