Posted on September 12, 2012 by dgcoker.wordpress.com

All cannot use the same kind of spiritual exercises,

But one suits this person, and another that.  Different 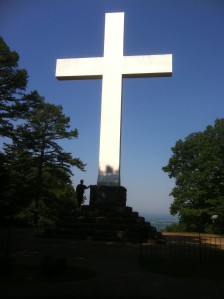 Devotions are suited also to the seasons, some being best for

The festivals and others for ordinary days.  We find some

helpful in temptations, others in peace and quietness.

Some things we like to consider when we are sad, and

Others when we are full of joy in the Lord.

June and I embarked upon a journey unlike any we had tried previously.  It was to be a journey without a clear destination, but it was to be a journey for the season of our life in which we find ourselves.   We are both well grounded in our faith and seek to practice Godliness in our daily walk.  Therefore, we knew at the onset our lives would call for a set of different disciplines. To place the ‘journey’ in proper prospective the reader needs to understand we have been married for 48 years.  The immediate question would be “why do you need to have a ‘rule of life’ as you mentioned in the first blog “spirituality.”  Secondly, why share or write so others can see and hear your thoughts?

The greatest battle occurring in the world today is not the war in the Middle East but the war being waged for our ‘minds’.  Like the athlete mentioned earlier in the Spirituality blog, it is imperative that a pattern of spiritual disciplines providing structure and direction become a lifestyle, otherwise you will gradually slide into the world of relativism and humanism.  It was with  this thought as our major premise June and I embarked on a journey taking us 4845 miles spending 24 hours a day with each other for 20 days.  The following are behaviors and outcomes we found to be helpful as we made the journey.

The Morning Watch:  We have all been told that the way to connect with God on a daily basis is to have a 30-minute “quiet time”.  That is,  you should sit down with your Bible open, read it a little and then lay a bunch of stuff on God, making sure to mention how excellent He is before running through the list of all the things you need. This process had almost become robotic. We have found regardless of the form it takes,  it is critical for the beginning of a day.  It is easy when you are retired, after all, why hurry.  Around the table, in a restaurant, or riding down the road, the morning watch sets the tone for the rest of the day.  At times a Socratic approach to scripture or a “help me understand this”,  and the inevitable,  we need to make this a matter of prayer,  highlights the time.

In addition to the many ideas that were personal, we decided to pray specifically each day for someone to come into our life,  that day, and we would know who he/she was as soon as we encounter the person(s).  We tried prayer centering as a technique to help us ‘be still’ and know that I am God”.  A hard concept for me to accomplish and I continue with my efforts. It is noteworthy, without fail,  every day we crossed paths with people with a common spirit,  and it was immediately recognized. It most cases it was totally unsolicited on our part but an encounter that developed into something special.    The Morning Watch was and continues to be essential.

Marriage should be a duet not a duel:  The famous Psychologist, Carl Rogers, was the father of the active listening technique so often used in psychotherapy. Dr. Roger’s question ‘What did you mean by that”or “can you tell me more,” to determine the basis of behavior brings about an avalanche of understanding. Driving long periods with time schedules that do not come together as planned can lead to stress.  One person under stress is enough.  The second person should become the positive force and the cheerleader.  Many times silence is best and other times humor melts the ice.  An example:   We adopted Patti, we got her from the global positioning system,  some months back and she was a tremendous travel companion.  This was especially true for June who announced she was “map challenged.”  When we first adopted Patti she was almost non-verbal, when she did speak it was one word; rerouting!  With time and patience Patti became a delightful travel partner.  On one particular day, while driving in a ‘downpour,’ I was ‘uptight’ as we entered the Lincoln Tunnel outside of New York City.  Half way through the tunnel Patti said “rerouting, make a U-turn.”  We broke into laughter and it was only after a short distance we realized the satellite had lost us and Patti was wondering where we were.  Throughout the rest of the trip this event created much laughter. Let your mind play with this concept and the next time something stressful comes into your life, merely say: rerouting.  Learn to be a duet. 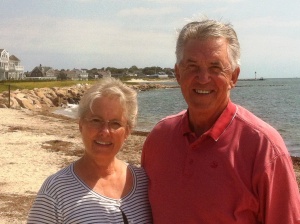 It is not necessary to go somewhere to have a good time: Sitting in a home owned and operated by an Amish couple with a special needs child I was humbled, not the false kind of humility that ends up being about us at the end of a day.  For me, humility is embracing smallness and is not a one-time proposition, but a daily event.  This concept is counterculture. Our society promotes living by the flesh; our mortal selves will scrap and claw for every ounce of self-promotion that we can get our hands on. ‘We have to be here,’ ‘we have got to have this,’ is ingrained into us by the culture.  It is within this context the voice of pride will rise up with a roar, urging us to take control. 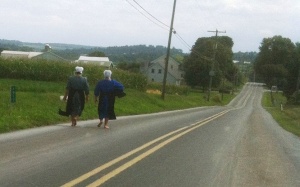 The time spent with people who are God fearing and God loving and who earned everything by the “sweat of their brow “was a reminder of the freedom I have and the privileges that come my way.  Taking pleasure in a sunset, a bird making a nest, fresh plowed ground, the harvest, and rest at the end of day without television or other technology produced a happiness that I found refreshing.  How about this as a challenge: a day without television, cell phones, and computers with only each other is bound to produce a new found freedom.

Family and friends: The highlight of our journey was June getting to see and spend a week with her family –  a sister of 81 years, a nephew who she hadn’t seen in many, many years, getting to meet her nephew Brad’s wife for the first time and their children, one named after her father, and  cousins, some of whom she had not seen since she left for college (1960).  A second stop was with friends in Virginia.  In both cases there was no grandiose party, no band, no music, just being together.

Beautiful and rich is an old friendship,

Grateful to the touch as ancient ivory, 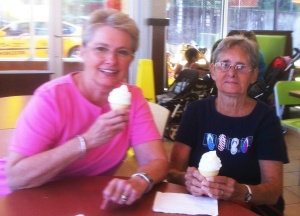 Smooth as aged wine, or sheen of Tapestry

Where light has lingered, intimate and long,

Full of tears and warm is an old friendship

That asks no longer deeds of gallantry,

Or any deed at all—save that the friend

Families and friends may be made in Heaven, but the maintenance must be done on earth.  Like a marriage, families are designed to be complimentary.  Everyone pulling together, not in competition, is the core of a family.

It was wonderful when June’s family came together. It was not about material things, who had accomplished the most, or whose house was the biggest or even some statement made years ago.  It was apparent learning to live became the maintenance of love.  Family relationships bathed in love and covered with forgiveness enhance mental health.

Ultimately,  June and I tried to revisit our Rule of Life and found the process far more important than most things we do with our time.  Henri Nouwen said, “The spiritual life is not something we add onto an already busy live.”  We have rekindled the spirit within us to control what we already do with an attitude of service.  Our rule is the starting point of all journeys—without a Rule our lives are not coming from a deep reservoir of the Holy Spirit but from our own limited human strength. The ‘journey’ has been one of the most meaningful pilgrimages we have made.

A note to the reader: Many parts of my life are in need of discipline; sleep, diet and exercise habits to name only a few.  Self discipline in any of these areas can be spiritual.  Any time you’ve gone for a run when it was the last thing you wanted to do or passed up a dessert, it probably tested your spirit!    Early in my college experience I found that writing was an excellent outlet for me.  Upon retirement I threw away large numbers of legal pads and notebooks filled with my ‘ramblins’.  Although lacking in grammar, syntax and other skills of the good writer, I have been transparent with my inadequacies in this area to you.   Writing is part of my Rule and I hope it has been meaningful. 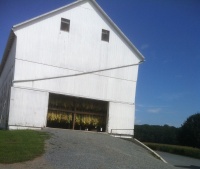 On the way to church meeting 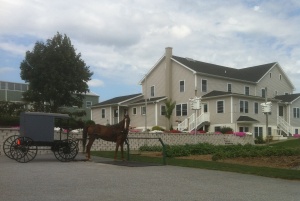 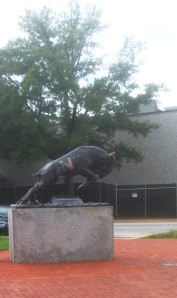 “Beware of the goat!”. Mascot of the Navy football team. 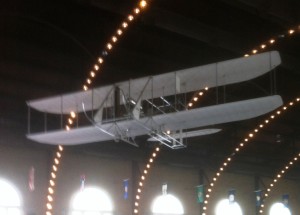 Replica of the first navy airplane, circa, 1912 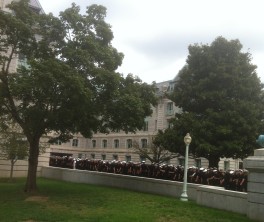 Midshipmen getting in formation for lunch 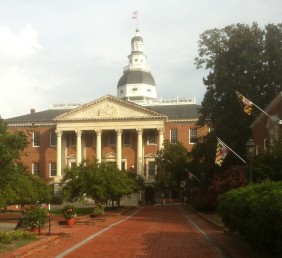 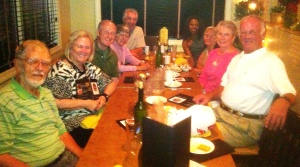 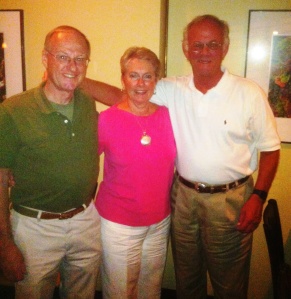 June with cousins, David and Butch 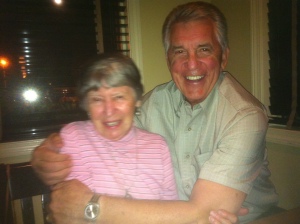 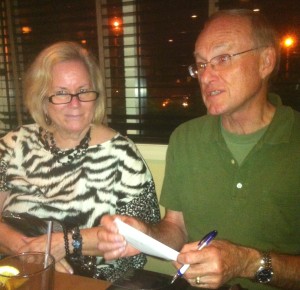 1 Response to The Journey………..A Pilgrimage