Posted on November 29, 2013 by dgcoker.wordpress.com

In the calm and everyday occurrences of life occasionally an event happens that is so heartwarming you must share with other people.  In the day of social media, individuals rush to post these events on Facebook. Others telephone or text a friend or go to the coffee shop where they can sit and share the event.  For someone who likes to write, you write.  Many times the writing goes to file 13 (trash can.) In any event  these processes, in the proper perspective, are healthy and provide a mental release.  So it is with this writing.

The Sound of laughter

In preparation for our traditional Thanksgiving gathering of the ‘Coker clan’,  June received a text from Kyle, our middle son, informing us that he and Natalie would be bringing two small children, Bryan (age 3, special needs child) and sister, Yari (age 4) with them along with Claire our 14 year old granddaughter.  Kyle and Natalie are active volunteers with the Agape of Georgia organization which provides faith- based foster placement for displaced children.  On an earlier occasion they had both of these children in their home while the mother was receiving intervention for drug abuse.

June and I began immediately trying to rearrange our lodging situation for the two little ones when the telephone buzzed a second time with another text from Kyle :  “Add two more to the dinner list.”  Children and Family services had removed four siblings from the home due to a relapse of the mother, with whom the children could no longer stay. In an effort to keep the brothers and sisters together, Kyle and Natalie graciously agreed to take the children for the holidays.  Lucy (age 7) and Uriel (age 10) joined Bryan and Yari for Thanksgiving with the Cokers.  An immediate transformation of bedrooms into multiple sleeping quarters was the order of the day. 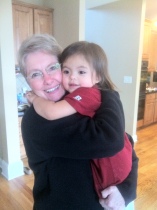 When the activities of Thanksgiving Day subsided and the immediate family had left, a second event involving Kris, our oldest son, and his wife Rebecca occurred in Gallatin, Tennessee a few days later—-  ‘A gender- revealing party.’  I hasten to add; I had not attended nor heard of a party to reveal the gender of a new baby.   The pomp and circumstances of the event took on a grandness worthy of notice.  Kris and Rebecca had made arrangements for June, (someone who truly enjoys cake making and decorating), to be contacted by the technician from the physician’s office to give her the gender of the child after Rebecca’s ultrasound.  Under no circumstance should this information be revealed to anyone, including, Kris, Rebecca and me.  Obviously, as the saying goes, I began throwing bread (metaphor or hints) in the water (everyday behavior) to ascertain the sex of this upcoming event.   All to no avail.

A social gathering brought grandparents, parents, immediate family and friends together for the grand event.  The cake with its entire splendor was center stage.  The social hour prior to the main event was filled with excitement including several myths as to how to tell the gender of a child prior to birth.  This only added to the excitement  leading to the cutting of the cake by Kris and Rebecca.

of  ‘diaper pins’, ‘baby rattles’, ‘booties’, and other items indicative of babies with a verse in the middle that read, “For I am Fearfully and Wonderfully Made”,  Psalm 139:14.

Crescendo, drum roll, voices became quite as Kris welcomed everyone by adding humor, “I am 45 and this is our first child and when I am 51 I will be the oldest father at the PTA meeting.”

It was time for the cake cutting and Rebecca cut the first slice revealing blue icing  in between the layers.  The announcement quickly followed for Kristian Luke Coker to arrive April 12, 2014